Photograph of the Frenier Sisters

We would love to add your descendances charts on our website

Quick Reference to some Mendota Members who are DESCENDANTS of Chief Cetanwakanmani (Little Crow). Dear Mendota members. We would love to add your descendances charts on our website. Not just the Felix, Robinette and LeClaire family. We are a community of 130 members in good standing. Send your stories or descendance charts to mendotadakota@gmail.com Your […]

Saint Kateri Tekakwitha, also known as Lily of the Mohawks was born 1656 and died April 17, 1680 She is a Catholic saint who was an Algonquinâ€“Mohawk laywoman. Born in the Mohawk village of Ossernenon, on the south side of the Mohawk River in present-day New York State, she contracted smallpox in an epidemic; her […] 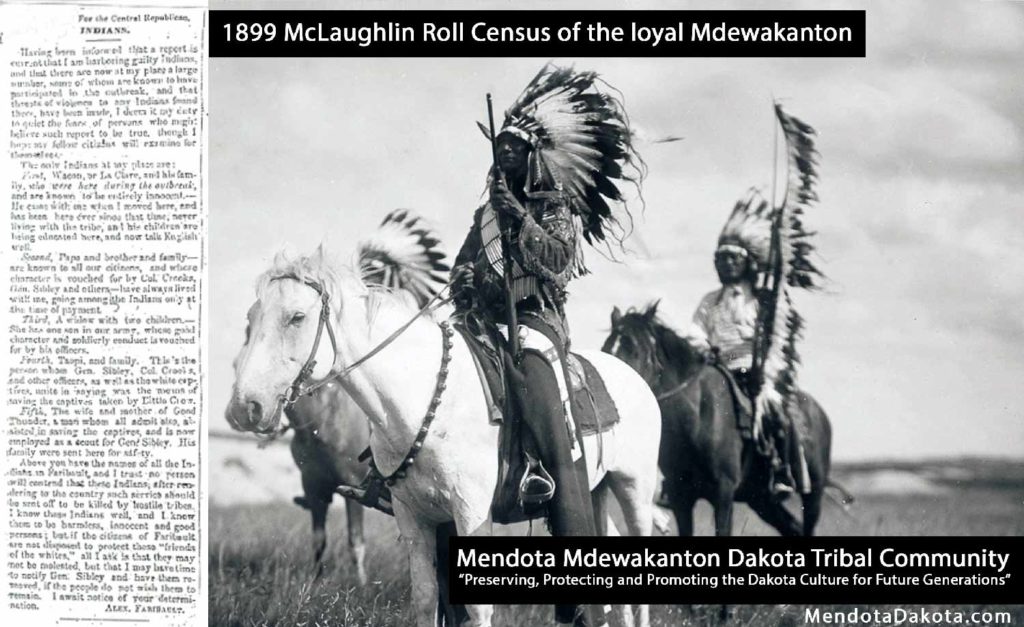 Faribault Central Republican – June 10, 1863 Having been informed that a report is current that I am harboring guilty Indians, and that there are now at my place a large number, some of whom are known to have participated in the outbreak, and that threats of violence to any Indians found there, have been […]

Mendota Dakota and the Rebirth of a Community, video documentary.

This documentary film follows the story of the Mendota Dakota, a Native American tribe from Mendota, Minnesota, from pre-Minnesota to the present era. It includes interviews with Jim Anderson, Sharon Lennartson, Jim Albrecht and Curt LeClaire of the Mendota Dakota tribe. It also features a short speech from Arvol Looking Horse, the 19th generation Keeper […]

A women from the Yankon Sioux Tribe sent this.

Oh Great Spirit Whose voice I hear in the winds. Let me walk in beauty. Make my hands respect the things you have made. Let me learn the lessons you have hidden in the leaf and rock. I seek strength, not to be greater than my brother, but to fight my greatest enemy – myself!

Our mother would have been 100 today.

She was born on March 21 1911. Here is a picture of her brothers and sister. Selisha is on the left side. We love and miss mom. Love Mickey, Beverly, Sharon, Linda and the rest of your family. My uncle Russ is in his 80’s, he has the white shirt on. My auntie Margaret is […]

The Mendota People will be having a ceremonyÂ  HONORING OUR ANCESTORS on February 5, 2011 at 11:00am.Â  Please tell people you know about this very special ceremony.Â  It would be nice to see more native people joining us. Everyone is welcome! The Sacred fire starts at 9:30am. Please join us at Fort Snelling State Park, […]

We have added a new link. MinnesotaHistory.netÂ  to our links page at http://mendotadakota.com/mn/link_exchange/ Be sure to check it out. If you have a link you would like to see added, let us know. http://www.MinnesotaHistory.net is a forum for discussing current events relating to the history of Minnesota

Crow Creek Sioux Land is NOT For Sale CLICK HERE to sign the demand to return of the unlawfully auctioned Crow Creek Sioux Tribal Lands to their rightful owners. To: Dakota Oyate, friends and supporters. Date:Â  December 15, 2009. Re: Ride Itinerary and Donation Needs â€“ on behalf of Peter Lengkeep, Crow Creek SD -2009 […]

222-Paper Please check out these sculptures, they are wonderful!

This is are very own Tiffany Eggenberg from our community, lets go Â support her. Sharon Â  Opening Reception is at 6pm, Screening at 7pm. All my Relations arts program will debut “Magic Wands” by film maker Elizabeth Day along with a new short by Jonathan Thunder, and a presentation of Hawk Eyes by Barbara Britain-a […]

Margaret Stewart does glass & marble engravings, one of a kind custom. www.StewartDesigns.com Designs can be taken from your own photos or even your own art work.Â  All engravings are one-of-a-kind, created for unique one-of-a-kind people! Your imagination is the limit! Styles of engraving are done free hand with miniature grind stones and is very […]

Illegal for Dakota Indians to enter Minnesota or Dakota?!?

After the Dakota Conflict in 1862, Congress passed legislation banning Dakota Indians from Minnesota and the Dakotas.Now, over 140 years later, one state lawmaker is asking Congress to repeal the law. As News 12’s Bryan Piatt reports… it’s stirring up mixed emotions among area tribe members. Sheldon Wolfchild read the news when he opened […]

March 22nd, 2009<– by Bruce White –> Â· No Comments Wiyaka Sinte Win or Tail Feather Woman, a Dakota woman who had a vision about the construction of a great drum, designed â€œto bring unity and healingâ€ among peoples, is to be honored this year by Dakota people. Sometime after 1862,Â Tail Feather Woman, who is […]

Traditional Arts. For more information visit the National Museum of the American Indianâ€™s.

Media only: Leonda Levchuk (202) 633-6613 Eileen Maxwell (202) 633-6615 Media Web site: http://newsdesk.si.edu National Museum of the American Indian Hosts Multicultural Festival as Part of Inaugural Events The Smithsonianâ€™s National Museum of the American Indian will host â€œOut of Many: A Multicultural Festival of Music, Dance and Storyâ€ from Saturday, Jan. 17, 2009, through […]

MORTON, Minn. – Gripping a cane tightly, Ernest Wabasha slowly reached to touch a pair of heavy iron shackles hanging from his mantel – the same shackles his great-grandfather, the legendary Chief Wabasha, wore during a forced march across the southwestern Minnesota plains a century ago.   A portrait of Chief Wabasha hung nearby, surrounded […]

Minnesota’s 150th birthday is viewed through American Indian eyes in a show at Ancient Traders Gallery.

Art: History lesson By Mary Abbe, Star Tribune Dyani-Reynolds-Whitehawk draws nooses and the number 38 in her flag-like painting about the Mankato event. It was, and still is, the largest mass execution in U.S. history. Minnesota’s 150th birthday is viewed through American Indian eyes in a show at Ancient Traders Gallery.   STATES, DATES AND […]

Tiffany Eggenberg offers sensitive pastel portraits of contemporary individuals whom she evidently encountered on an annual march commemorating the Dakota’s 1862-63 incarceration near Fort Snelling. One of the more troubling incidents in Minnesota history occurred in Mankato 146 years ago today when 38 Dakota Sioux Indians were hanged in the largest mass execution in U.S. […]

The Riders in Mankato

December 27th: From Chuck. I arrived in Mankato on Christmas day at about 6 pm. I missed the afternoon arrival of the riders, but got there in time for the evening event. When I got to the conference room, there was a Native young lady that was singing a Christmas related carol, it was just […]