Hypolite Dupuis GG-grandfather to many members of Mendota Community.

Hypolite Dupuis was known as a “veritable old settler” in the Minnesota River Valley when it was largely inhabited by Native Americans. He was a French Canadian fur trader who eventually settled in Mendota, Minnesota, opened the first general store there, and served as the first treasurer of Dakota County.

Hypolite Dupuis was born October 16, 1804 at LaPrairie de la Madeleine (near Montreal), Lower Canada, to Michael Dupuis and Marie Louise Denault, as referenced in a copy of his baptismal record from the church Notre-Dame-de-LaPrairie-de-la-Madeleine in La Prairie, Quebec. Not much is known of his early life, but presumably he engaged in the fur trade, as there were a couple other men named Dupuis that worked for the American Fur Company.

About 1830, Hypolite Dupuis began to work for Joseph Renville at Lac Qui Parle. He moved to Mendota in 1840, to a small cabin on the Sibley property. Dupuis may have then begun to clerk for Henry Hastings Sibley.

Dupuis built the brick house, in which the Sibley Historic Site offices are today, in 1854 for $3500. It is a two-story house made of Milwaukee brick. From this house he ran for a time a general store and grocery on the main floor. He also served as a Justice of the Peace and Dakota County’s first treasurer. He managed Sibley’s main store at Saint Peter’s presumably after Frederic B. Sibley, and helped Sibley liquidate his fur trade interests in 1853.

Hypolite Dupuis again entered the trade for a brief time at Fort Totten (near Bismark), North Dakota, in the 1870’s. But by 1879, he was again living in Minnesota. A copy of his obituary from the Daily Globe in St. Paul, Minnesota (shown below – reference of July 29, 1879) states that “he died a few days ago at Mendota.” His wife Angelique died a widow on January 2, 1890. Hypolite apparently was a talented individual, and he spoke several languages fluently, including English, French and Patois. 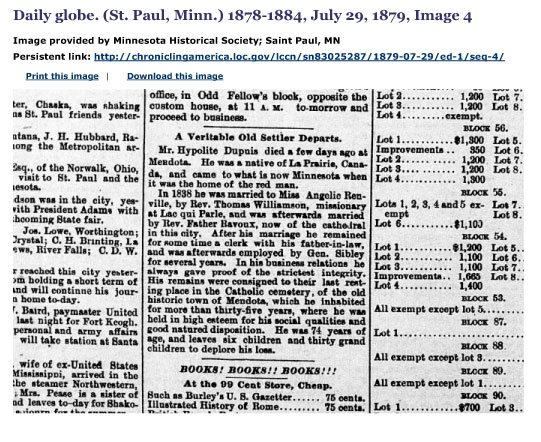 Like Loading...
PrevPreviousRenville County, Please read about some broken treaties.
NextPatch Newspaper thank you for posting this article.Next