An “art dad” who championed emerging talents, he illuminated the uneasy relationship between Native cultures and mainstream society.
By Alicia Eler Star Tribune 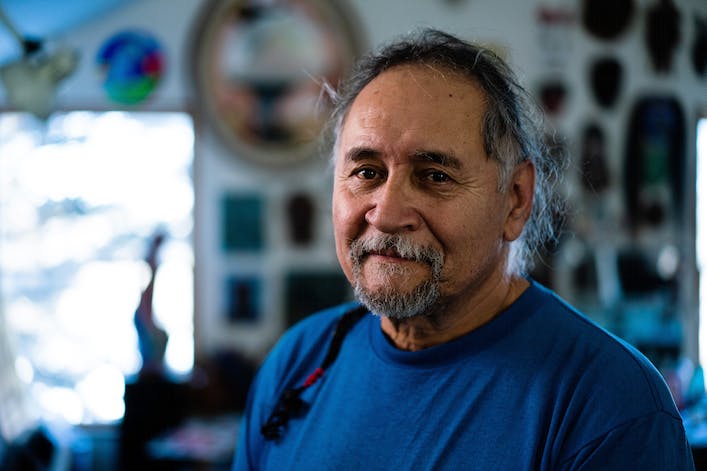 Gallery: Jim Denomie in his home studio in 2019.

A year ago artist Jim Denomie stood at 38th Street and Chicago Avenue, gazing up at “Toppled Monuments,” his painting-turned-billboard that loomed over the south Minneapolis corner where George Floyd’s life was cut short.

Denomie had paired a reimagined scene from “The Wizard of Oz” with text that read: “All Mothers Were Summoned When George Floyd Called Out for His Momma.”

The surreal landscape included a Native man in a feathered headdress, sitting in a lawn chair, drink in hand, in front of a Statue of Liberty that had collapsed onto her back. “This wolf chasing the two rabbits in the background, that’s police brutality,” he told a reporter.

A master of color and humor who wanted everyone to learn from his art without being didactic, Denomie accumulated a long list of accolades, including the McKnight Distinguished Artist Award and a Native Arts & Culture National Artist Fellowship.

Walker Art Center, Weisman Art Museum, the Minneapolis Institute of Art (Mia) and the Denver Art Museum added his work to their collections, and he was featured in international shows in Mexico City, Vienna and Sao Paulo.

But while he relished the recognition, Denomie was always thinking of his community. A devoted father, grandfather and uncle, he was a champion of young artists — the guy who showed up at every opening.

“Art dad” is what Anishinaabe artist Andrea Carlson fondly called him. She and Denomie shared their first major art museum exhibition in 2007 at Mia.

“He’d have paint and stuff on the top of his braid and drywall dust all over, showing up to openings from a job,” she said. (Denomie’s day job was doing drywall construction.) “He’d hop out of his truck, dust himself off, and walk into a show.

“Artists in New York don’t do that.”

Denomie’s work flips the American colonial-settler narrative on its head, confronting the country’s troubled past with playful but biting wit.

In his painting “Edward Curtis Paparazzi,” the controversial photographer of Native American life is portrayed as an intrusive voyeur, stealing pics at the fictional Black Hills Golf and Country Club. (“Golf is my highest passion, more than painting,” once said the artist, who liked to take breaks in his studio to practice putting.)

A longtime friend, Twin Cities artist Frank Gaard, said he loved “the color” in Denomie’s work, “the fact that it was imagistic, dream images, hallucinatory. … It is very political art in the sense of remembering the horrors of what took place.”

Denomie loaded his work with symbolism. In his 2014 “Tonto/Lone Ranger” series, the two TV characters represent the uneasy relationship between the Native and mainstream cultures.

“For someone so modest and kind, Jim had a killer wit,” said Pulitzer Prize-winning writer Louise Erdrich, an enrolled member of the Turtle Mountain Band of Chippewa Indians. “When Jim’s Tonto complains ‘You lied to me’ and the Lone Ranger says, ‘Get used to it,’ he encapsulates over 500 years of Native-White relations.” 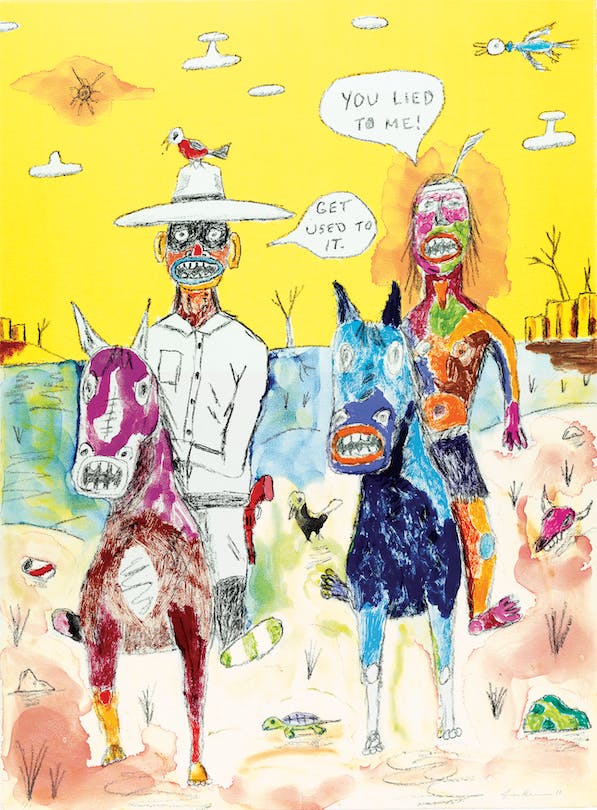 Figures both benevolent and deranged populate an apocalyptic landscape in his “Standing Rock” series of the late 2010s, inspired by protests against the Dakota Access oil pipeline near the Standing Rock Indian Reservation. Two-headed dogs — an allusion to the mythical Cerberus guarding the gate to Hades — bark as Native people canoe down a orange, red and pink river. Donald Trump gropes a blindfolded Lady Justice.

A rabbit — Denomie’s spirit animal — was also present, as it often was in his work.

“He always includes himself in in some way — that long tradition in political painting of the artist being a witness, whether he is putting himself in there as Jim or as a rabbit, as if to say, ‘I’m keeping an eye on this,'” said Mia curator Robert Cozzolino.

“He had such an affinity with rabbits,” said Carlson. “In his yard, they had all their shenanigans … He’s such a kind soul, it matched a rabbit.”

An Ojibwe life in art

Denomie, who joked that he was “a delayed bloomer,” didn’t learn about his own Anishnabee background until later in life.

His Ojibwe name is Assiginaak (Red Wing Black Bird), but he didn’t have his naming ceremony until his mid-30s — something that traditionally happens around age 1. He viewed his personal history as part of a federal “assimilation campaign,” as Native Americans relocated to urban centers.

Born July 6, 1955, on the Lac Courte Oreilles Reservation near Hayward, Wis., he was raised by a single mom in south Minneapolis. He always wanted to be an artist, but a guidance counselor at Minneapolis South High School discouraged him from that path, and he ended up dropping out at 16.

For the next 20 years, Denomie drank and partied. At the same time, he found work in the construction industry, bought a home, married and had two daughters.

He finally decided to get sober and in 1990, he enrolled at the University of Minnesota. He intended to study the health sciences but took an art class, where a professor recognized his gifts. Another surprise during his college years: son Cody.

He met his second wife, Diane, 27 years ago at a party near the university.

“We were both reaching for the Jimmy Dean sausage roll at the same time, we used to joke,” said Wilson. “Then we started talking about art — it’s a natural leap from sausage roll to art — and in that first conversation, it was … You know how sometimes you can kind of recognize a partner when you meet them? There’s something very deep that happens.”

As word spread of Denomie’s illness, photos of the artist and his work flooded social media.

In 2004, he started a painting-a-day project, which he called a “self-imposed MFA” (master’s in fine arts). He produced more than 300 portraits. “They were like snowflakes,” he told the Star Tribune in 2019.

Carlson was a grad student then at the Minneapolis College of Art and Design. Denomie visited her studio and on the way home, told Minneapolis gallerist Todd Bockley to see her work.

“He’s been my champion, he’s changed my life,” said Carlson. “He used to joke that he was going to ride my coattails, and at that time he was already a celebrity to me.”

Ponca artist Julie Buffalohead has known Denomie since 1995. “He really encapsulated what Native values are in his kindness, generosity and humor, and I think he was always looking to organize Native artists together,” she said. “He was a very down-to-earth person who brought humanity to a very self-serving art world.”

“And it wasn’t just Native artists he supported,” noted Carlson. “It was everyone. Everyone loved Jim.”

Recently retired from drywall work, he and Wilson had planned to do art full-time, side by side at their home where he had converted a garage into a writing studio for her, and he had a sprawling, second-floor studio.

“That is just the heartbreak,” Wilson said. “He had so much work left to do, so many more paintings in him. Her husband’s work “fired up her imagination” with its visceral colors and forms.

In Ojibwe culture, the belief is that the soul begins a four-day journey when it leaves the body. “He goes to the moon and from there the teaching is that he goes into the universe,” said Carlson. “It is comforting for me to think about that.”

Denomie is preceded in death by his sister Jackie. He is survived by his wife; daughters Cheryl Lane and Sheila Umland, son Cody Cyson and stepdaughter Jodi Bean; mother Pamela Almquist; nine grandchildren, and many nieces and nephews.