Long, long ago, animals and trees talked with each other, but there was no fire at that time.Fox was most clever and he tried to think of a way to create fire for the world. One day, he decided to visit the Geese, te-tl, whose cry he wished to learn how to imitate. They promised […]

Apache, The Story of Creation In the beginning nothing existed–no earth, no sky, no sun, no moon, only darkness was everywhere. Suddenly from the darkness emerged a thin disc, one side yellow and the other side white, appearing suspended in midair. Within the disc sat a small bearded man, Creator, the One Who Lives Above. […]

NATIVE STORIES: Blackfoot, The Origins of the Buffalo Dance

NATIVE STORIES: Apache, How the Buffalo Were Released on Earth

Apache: How the Buffalo Were Released on Earth ——————————————————————————– In the first days a powerful being named Humpback owned all the buffalo. He kept them in a corral in the mountains north of San Juan, where he lived with his young son. Not one buffalo would Humpback release for the people on earth, nor would […]

Windigo Ojibwa First Nation retold by S. E. Schlosser The storm lasted so long that they thought they would starve. Finally, when the wind and swirling snow had died away to just a memory, the father, who was a brave warrior, ventured outside. The next storm was already on the horizon, but if food was […]

“Crow Brings the Daylight” -An Inuit Myth An Inuit Myth retold by S. E. Schlosser Long, long ago, when the world was still new, the Inuit lived in darkness in their home in the fastness of the north. They had never heard of daylight, and when it was first explained to them by Crow, who […]

Coyote and Wishpoosh (Chinook) retold by S. E. Schlosser Now Wishpoosh the monster beaver lived in the beautiful Lake Cle-el-lum which was full of fish. Every day, the animal people would come to the lake, wanting to catch some fish, but Wishpoosh the giant beaver drove them away with many threats and great splashing. If […]

Coyote and the Columbia

Coyote and the Columbia (Sahaptin/Salishan Tribes) retold by S. E. Schlosser One day, Coyote was walking along. The sun was shining brightly, and Coyote felt very hot. “I would like a cloud,” Coyote said. So a cloud came and made some shade for Coyote. Coyote was not satisfied. “I would like more clouds,” he said. […]

Wize old Indian can for tell the weather

There was this old Indian who started working for this construction company. His first day on the job the crew was worried about the dark clouds overhead. He spoke up and said “It ain’t gonna rain”. Sure enough, he was right! And so for months this went on, the crew asked him everyday what the […]

Native ghosts and hauntings in Minnesota!

I heard about some of these places in Minnesota that were either haunted by Natives or were haunted because of Natives… or something like that, anyway, thought you might get a kick out of reading about them, heck, if you live in Minnesopta, why not go viset some of them and let us know what […]

QUESTION: Who is this Indian? 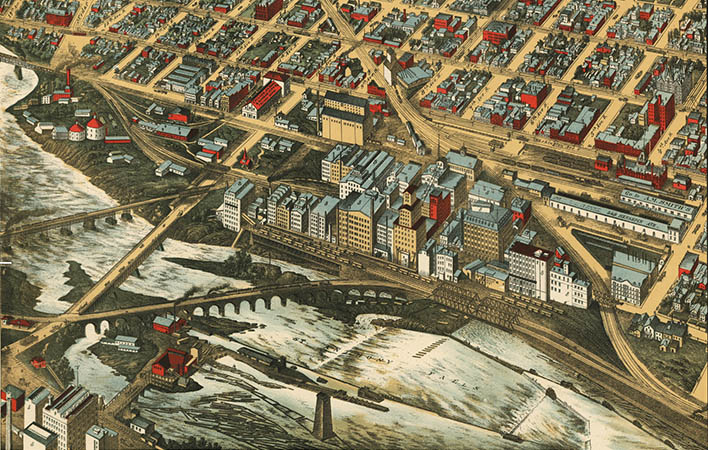 Minneapolis history before the middle of the 19th Century is really the history of the Dakota (Sioux) American Indians.

It is believed that the Dakota people lived and flourished in the area to be known as Minneapolis before Daniel Greysolon, Sieur Du Luth (known as Duluth), and Father Louis Hennepin visited the area in the 1680s. The Dakota bands were well established in the culture of hunting and gathering and were skilled in horsemanship. The other dominant Indian Nation in the area was the Ojibwe. Intertribal fighting between the Ojibwe and the Dakota had a long history. By 1800, many Dakota Mdewakanton had settled along the lower Minnesota and Mississippi Rivers below the sacred site of the Falls of St. Anthony.

by Clara NiiSkaIn August 1881, Crow Dog, â€œbelonging toâ€ the Brule Sioux Band, killed Spotted Tail, who signed the treaty of 1868 as the principal Chief of the Brule Sioux. â€œThe killing,â€ according to court records, â€œtook place at their agency upon the Great Sioux Indian reservation, in the first judicial district of Dakota Territory.â€ […]

A very great vision is needed and the man who has it must follow it as the eagle seeks the deepest blue of the sky. Chief Crazy Horse  “My lands are where my dead lie buried” “I will return to you in stone” When asked about the small stone he always wore. “A very great […]

Letter from Leonard Peltier 25th Year Reunion of Incident At Oglala June 26, 2000 Greetings Friends and Supporters, Twenty Five years has passed since the fatal shoot-out on the Jumping Bull Ranch occurred, and for twenty-five years I have been forced away from my people and my home, which I consider Oglala to be.  I […]

NYM press release March 2007 unceded Coast Salish Territory nymchapter604(at)hotmail.com March 30, 2007 Harriet Nahanee, a 73 year old Pacheedaht Grandmother, Elder, and Warrior passed away on February 24, 2007, in the manner that she lived her life. Standing strong defending Our Land and Our People. She died from pneumonia and undiagnosed lung cancer after […]

Incident At Oglala – Video and Documentary

By Katrina Plotz December 13, 2007 Overlooking 35W and 94th St. in Bloomington, a billboard for KQRS radio reads â€˜Our Lawyer is Always Busy.â€™ According to protesters who gathered outside station headquarters last week, KQRS has a battle on its hands. On December 6, more than 75 people braved single-digit temperatures to demand that the […]

By Mike Graham Although the U.S. Federal Government today does not issue bounties for Indian scalps and calling for their extermination, the Republican party is waging a national political economic war against the Native American community through their anti-Indian politics. Republican party elected representatives, state and federal are fully supporting anti-Indian groups like “One Nation […]