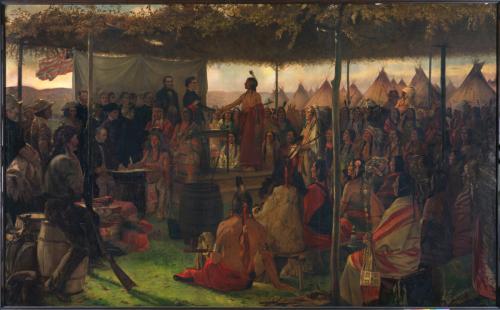 “Everything that they used to get them to sign treaties, I think was illegal in a lot of ways–browbeating, brainwashing, and then on the other hand telling them, ‘If you sign this treaty, youâ€™re not going to ever have to work or hunt again; weâ€™ll take care of you.’ Everything will be provided. Every year youâ€™ll get so much money to buy your needs, your pots and pans, but weâ€™ll also have food coming in every month, or once a year for you. The other alternative is: ‘Weâ€™re going to drive you all the way to the Rocky Mountains where youâ€™re going to starve to death and weâ€™ll never have to worry about you again.’ Those were the conditions that were being talked about, and sometimes I think they might have done that.”

From 1778 to 1871, the United States negotiated treaties with various Indian tribes to support westward expansion. These treaties were agreements whereby Indian nations would exchange their rights to hunt and to live on parcels of land for trade goods, yearly cash payments, and the right to remain on part of their homelands. These treaties, which were almost wholly dishonored by the the U.S. government, helped set the stage for U.S. government actions such as the Indian Removal Act of 1830. Indian nations who resisted treaty attempts found themselves facing forced removal further westward to “Indian Territories.”

Explore the decisions and outcomes that Dakota people faced when the U.S. government desired to buy and open the land to newcomers in the 19th century. This interactive will take about 10 minutes to complete. 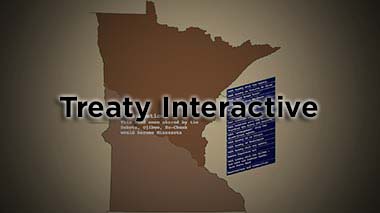 Starting in 1805, the United States negotiated treaties with Minnesota’s indigenous peoples. Explore each treaty and see how changing boundaries reflect the influx of settlers and displacement of the Dakota, Ojibwe, and Ho-Chunk.

Beginning in 1805, Indian nations in the area that became Minnesota madeÂ concessions of landÂ for specific uses by the U.S. government through treaties. In exchange, they received money, goods, and various promises.

By 1858, the year Minnesota became a state, almost all Indian lands in Minnesota had been ceded or reserved for future settlement. In 1862, the U.S. government provided incentives for newcomers to move onto the land through theÂ Homestead Act.

There are 375 treaties with Indian nations recognized by the U.S. Department of State.

For more information on treaties, see:

The American Indian Treaties PortalÂ by University of Nebraska, Lincoln.

The Avalon Project: Treaties Between the United States and Native Americans, by Yale University.