Mendota Dakota Community Center to be demolished for restaurant parking

The Mendota Dakota tribal group has been struggling to keep the community center it has in Mendota, but the group was recently given a 60-day notice to vacate the property. The old house is planned to be demolished to be turned into a parking lot for the restaurant next door. While the group still has until the end of March to vacate, the cultural chairman Jim Anderson is moving his family into the house Saturday as a way of protesting that the Mendota Dakota have to leave the land. In this photo:] Anderson, front, prepares to head out to pick up a new load while his son Jim Anderson Jr. waits for his father.

The box spring for Jim Anderson’s bed wouldn’t fit coming up the stairs, so he and his friends shimmied it through a second-story window instead.

On Saturday, Anderson, a leader of the Mendota Mdewakanton Dakota Community, moved into the rundown house in Mendota that has served as the group’s community center, where he will be staying with his wife and 2-year-old daughter despite a plan to turn the property into a parking lot for a neighboring restaurant. The community consists of about 250 people.

The community was recently given notice that it must vacate the residence by the end of March. But Anderson said he intends to live in the house until the property owner is willing to negotiate and allow the group to stay.

"We’re tired of being run out of Mendota," Anderson said. "For the Dakota people, this is our sacred center, and it always has been. We need to keep our established place in this town." 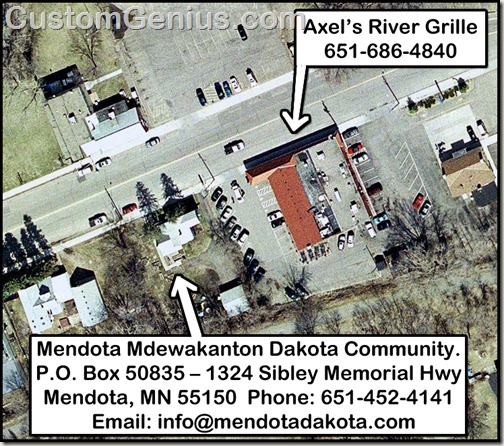 While the scenario may seem to be pulled straight from the classic Joni Mitchell song "Big Yellow Taxi," the aging house on Sibley Memorial Highway, which winds through the tiny town of Mendota, is far from a paradise.

The house was built in 1880. For several months, it had no water service, meaning toilets couldn’t be flushed and dishes couldn’t be washed until Anderson recently repaired it.

But still, it was a key gathering place for the group.

The Mendota Dakota community has a tumultuous history. Anderson says he is a descendant of a family that was promised land and money from the government but was never awarded it.

"It’s been a historical pattern to try to eradicate us," he said.

Mendota continues to be a place of spiritual significance for the Mendota Dakota, who traditionally believe that life began nearby where the Minnesota and Mississippi rivers meet.

Unlike the nearby Shakopee Mdewakanton Sioux Community, the Mendota Dakota aren’t acknowledged by the federal government as a recognized tribe, a designation which would make the group eligible for funding and services from the Bureau of Indian Affairs.

A short, evening drive down Sibley Memorial shows that parking is an issue in Mendota. Cars often line both sides of the highway.

"I drove up there last night and you had to park almost up near [the Church of St. Peter]," said Mendota Mayor Brian Mielke.

A representative of Axel’s River Grille next door to the Mendota Dakota center has put down a deposit to secure the purchase of the property, which according to Dakota County property records was recently valued at $185,500.

The plan to turn the property into a lot would give Axel’s about 24 additional parking spaces. Right now, the restaurant has to use overflow parking at the nearby VFW to help accommodate diners.

A couple of years ago, Lucky’s 13 Pub, the only other full-service restaurant in town besides Axel’s, purchased the property across the street from its building to turn into a parking lot, Mielke said.

The Axel’s sale isn’t final. The restaurant is working on a plan for a storm water management system for the site. There is going to be more discussion about the property at an upcoming city council meeting.

At this time, the city probably won’t get involved with Anderson’s move except to make sure there is working water in the building, said City Attorney Tom Lehmann.

The map below can be moved with your mouse, zoomed with the controls.