Gather for Clyde Bellecourt’s Funeral Services in Minneapolis. Proclamation to Clyde from.

MINNEAPOLIS — Leaders and hundreds of supporters attended the wake service Thursday evening for Clyde Bellecourt (White Earth Ojibwe), one of the original founders of the American Indian Movement (AIM) who passed away on Tuesday morning due to complications with cancer. He was 85.

The wake service for Clyde Bellecourt began for the general public at 7:00 pm at the East Phillips Park Cultural & Community Center on Minneapolis’s Southside, near the Little Earth neighborhood. A wake service is also scheduled for Friday evening on the White Earth Indian Reservation followed by a traditional Ojibwe funeral service and burial Saturday morning.

Community leaders spoke of Bellecourt’s bravery and tenacity to fight for causes not popular to society.

“He talked about what it was to be brave, to be bold, to fight for what you want no matter what they do to you,” said community leader Spike Moss during Thursday’s services. 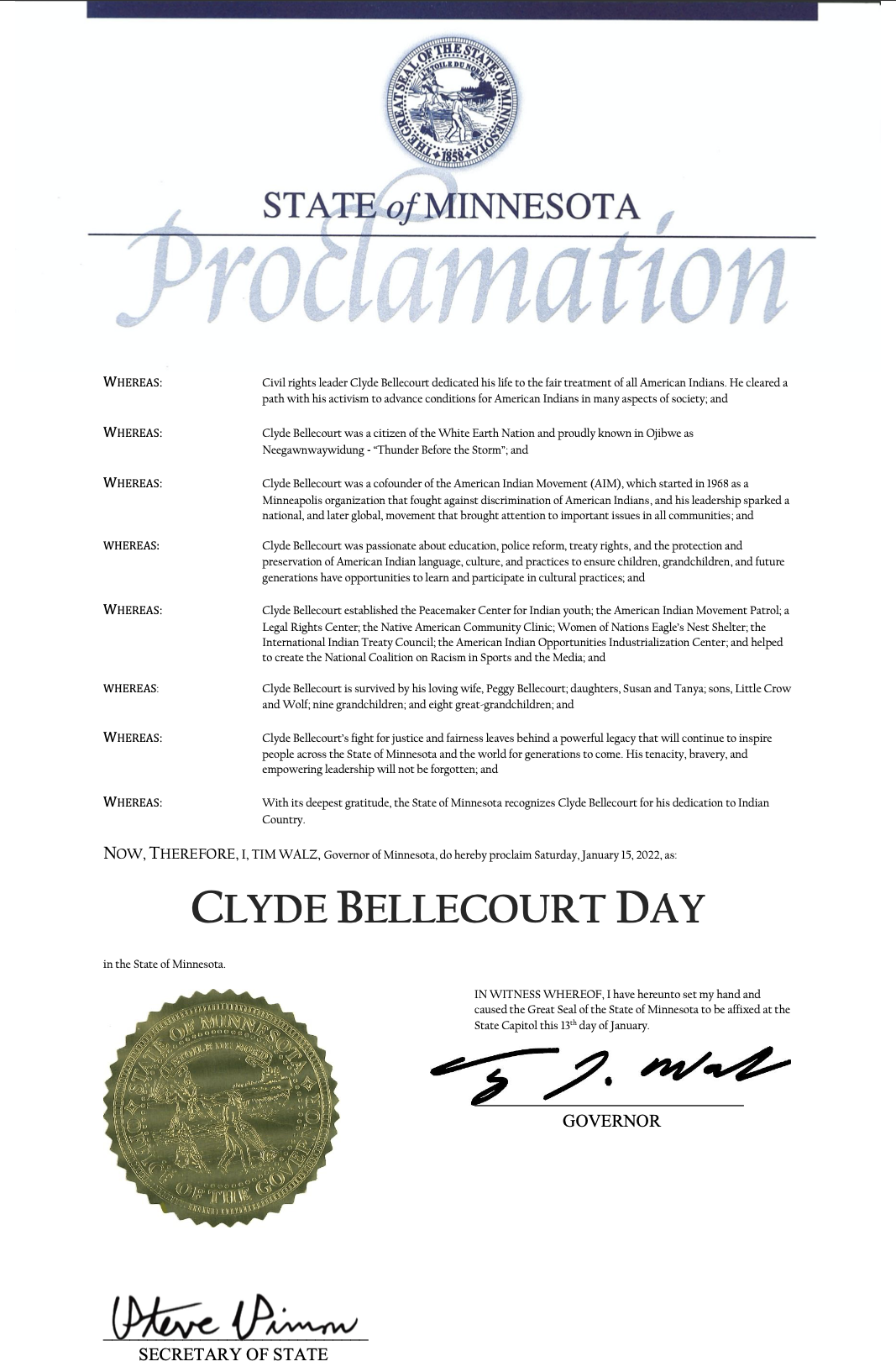 “There are few people that leave such a mark where you remember every single interaction you’ve had with them,” said Minneapolis Mayor Jacob Frey of Clyde Bellecourt during his wake service on Thursday evening. “Clyde had that charisma and persona and his presence was always preceded by drum beats when he entered City Hall.”

More than 300 people attended the wake service to pay their final respects to Bellencourt, who was one of the original founders of AIM and a well-known community leader. Founded in 1968 in Minneapolis, AIM would eventually gain international attention for protesting against the conditions many American Indians faced in society including police brutality, discrimination in employment and housing, and many other issues.

“With its deepest gratitude, the State of Minnesota recognizes Clyde Bellecourt for his dedication to Indian Country,” reads the proclamation.

Clyde Bellecourt is survived by his wife Peggy, his sister Judy, his children Susie, Tanya, Crow, and Wolf, as well as many nieces, nephews, grandchildren, friends, and relatives.

The truth about Indian Boarding Schools

This month, we’re asking our readers to help us raise $10,000 to fund our year-long journalism initiative called “The Indian Boarding School Project: A Dark Chapter in History.”  Our mission is to shine a light on the dark era of forced assimilation of native American children by the U.S. government and churches.  You’ll be able to read stories each week and join us for Livestream events to understand what the Indian Boarding School era has meant to Native Americans — and what it still means today.

Donate
Free Newsletter
About The Author
Darren Thompson
Darren Thompson (Lac du Flambeau Ojibwe) is a freelance journalist and based in the Twin Cities of Minnesota, where he also contributes to Unicorn Riot, an alternative media publication. Thompson has reported on political unrest, tribal sovereignty, and Indigenous issues for the Aboriginal Peoples Television Network, Indian Country Today, Native News Online, Powwows.com and Unicorn Riot. He has contributed to the New York Times, the Washington Post, and Voice of America on various Indigenous issues in international conversation. He has a bachelor’s degree in Criminology & Law Studies from Marquette University in Milwaukee, Wisconsin.