Finding a new Native voice as an Independent -Obama

Like millions of other Americans I watched the State of the Union address by President Barack Obama almost as a moth drawn to a flame. I saw something afoot that I havenâ€™t read about in the words of other columnists even though it was not something I expected.

Whenever the President made a point that may have been intended to draw the audience together, African American, white women and Democrats stood and cheered while their Republican counterparts sat on their hands.

The real problem with this is that

the Republican delegation was made up entirely of white males. Is this indicative of a racial divide? While most African Americans cheer for Obama are those opposed to his politics also opposed to his race? It certainly seemed that way to me. 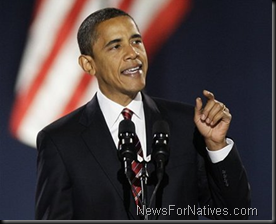 The one political group not visible during the address was the one group that will make a huge difference in the elections of 2010: the Independents. It was this group that took it to the Democrats in Massachusetts and cost them the seat held by a Democrat for more than 50 years. It is clear that the Independents were saying with their vote: Obama, you do not speak for me. To even think that Senator Ted Kennedyâ€™s seat would be taken by a Republican even 1 year ago would have been heresy. The Obama Administration found itself asleep at the switch.

Have either the Democrats or the Republicans truly been representative of the minorities or most Americans in America? What have the Democrats, who have professed to be the shining beacon for minorities since the days of Franklin Delano Roosevelt, done to earn the minority vote?

As an example, they have taken the votes of Native Americans for granted for too many years. As I have suggested in the past, it is time for Native Americans to shake their traditional support of Democrats and shift their allegiance to the Independent Party.

All you have to do is go to the courthouse where you are registered to vote and tell the clerk you wish to switch party affiliations. You sign a simple form and gazooks, you are now an Independent.

This will make you a political magnet for Republicans and Democrats. They will come after your vote with promises they may actually be forced to keep, that is if they want your vote in the next election.

There is a sure way to test this approach. Look around you and whether you live in an urban setting or on an Indian reservation ask yourself: Am I better off now than I was last year? Am I better off than I was 10 years ago? I think you will soon find the answer to that question. And stop thinking of yourself as a victim, but instead see yourself as a new, independent political force, because that is what you will become.

You can bet that the Democrats and the Republicans will come up with ideas they hope will secure your vote because both parties know that in states with large Native populations, your vote can and will make the difference. But never forget that Democrats and Republicans have been handing you empty promises for more than 100 years.

It is not carved in stone that you have to be a Democrat, or a Republican, for that matter. The same old politics of the past has not made that much of an improvement in your life and you know it. The worst thing that can happen to either party is that they cannot ever take your vote for granted again and they will soon understand that your vote is a vote they must earn. If you are an Independent you can sort through the platforms of the other parties and pick and choose those with ideas closer to your own.

South Dakota must open its primary elections. At the moment if you are an Independent in South Dakota you are not allowed to vote in the primaries and that is simply un-American. We can change this law as one voice. To learn more about the Independent movement go to Independentvoice.org. You may be surprised how many independent thinkers are on this website and how so many of them think just like you.

The Democrats and the Republicans are in gridlock. They march to the same tune and cannot move forward because neither side will cross the aisle. It is a childish game that makes politics more important than the people.

The state of union is in disarray because bi-partisan politics is dead. If Native Americans are to find their own voice in American politics, they must separate themselves from the mainstream and join the ranks of the Independents.

(Tim Giago, an Oglala Lakota, is the publisher of Native Sun News. He was the founder and first president of the Native American Journalists Association, the 1985 recipient of the H. L. Mencken Award, and a Nieman Fellow at Harvard with the Class of 1991. Giago was inducted into the South Dakota Newspaper Hall of Fame in 2008. He can be reached at editor@nsweekly.com)